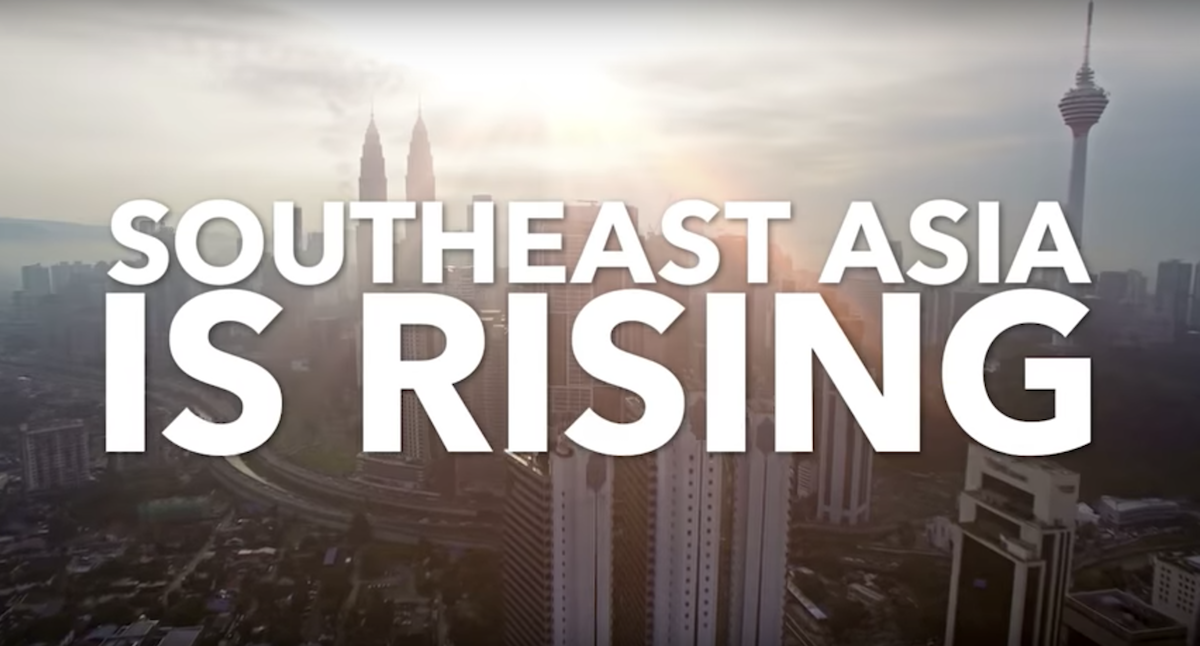 With 650 million people people across 11 different countries, and some of the most favorable working age demographics in the world, South East Asia is primed to be a dominant force in the digital economy.

The rapid adoption of digital technologies combined with macro trends and government efforts across the region are bridging populations, cultures and island archipelagos. In 2015 only 5.5%, or less that 1% of total retail sales, was spent on ecommerce. By 2025 it’s expected to reach around $88 billion, or 6.4% of retail sales.

What are the Macro Trends driving digital adoption?

The five most populous Southeast Asian countries together have over 90 million youth, or close to an average of 17% of each country’s population, with more than half the population of South East Asia under 30.

Technology and the disruption of digital is shaping the way youth in the region live and work. Job opportunities – freelancing, remote working and offshoring – have increased exponentially, and are no longer opportunities limited to the big cities. With the widespread access to internet, a deeper penetration of mobile connectivity, and stable electricity, freelancing and cloud based work is becoming part of day-to-day life.

Facebook is also recognizing the explosion of growth in the region with the launch of We Think Digital, an online education portal for the Asia Pacific region. The aim is to educate and train 1 million people across 8 countries in Asia Pacific by 2020. 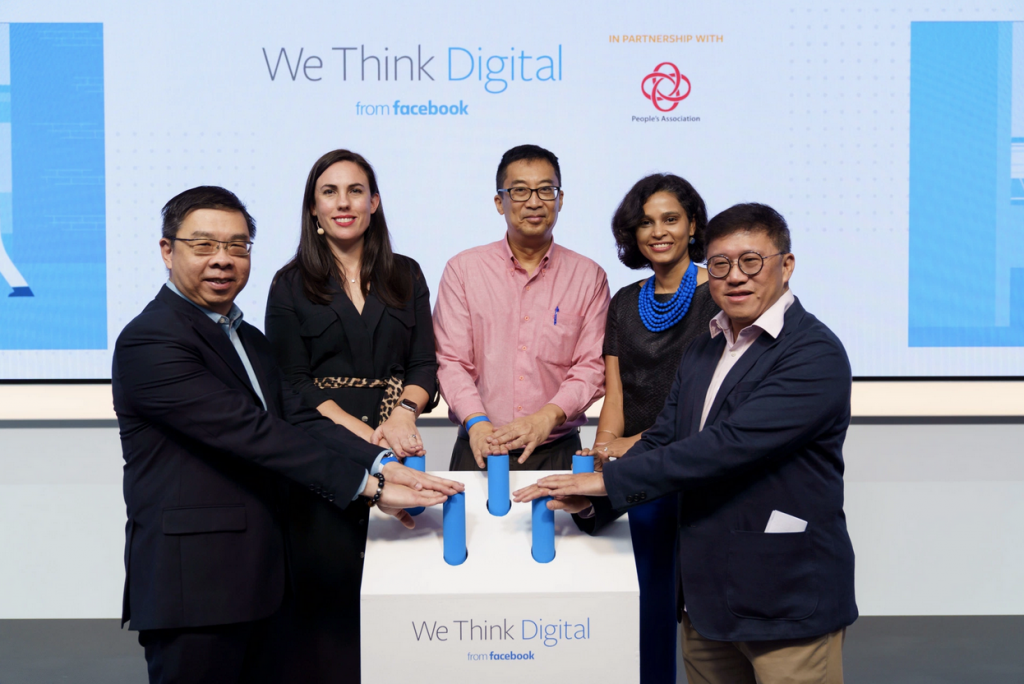 Over the past 20 – 30 years South East Asia has seen hundreds of millions of people rise from poverty to embrace middle class lifestyles. Access to electricity, fresh water and affordable housing is becoming standard for the aspiring and emerging middle class. While the established middle class and affluent seek and purchase the latest technology, home appliances, overseas travel and consumer goods to support their lifestyle.

According to Consulting firm McKinsey expects the number of middle class households to reach 120 million by 2025, an increase of 100% since 2010.

However, for South East Asia’s most populous economies —Indonesia, the Philippines, Thailand, Vietnam — the affluent class is expected to increase by 8% per year from 2017 through 2030, and increase from 46 million to 125 million. 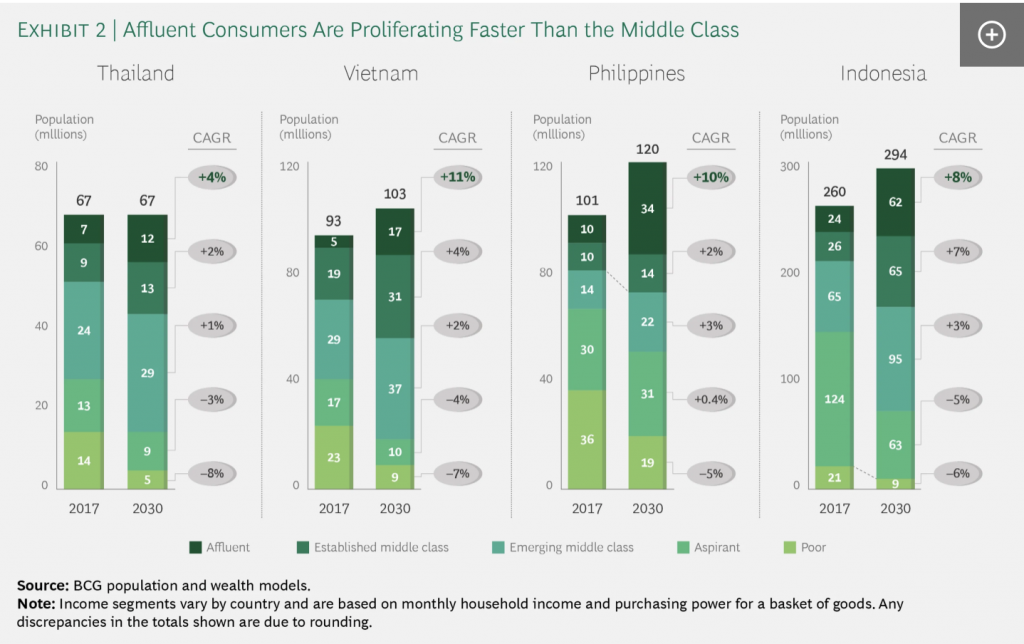 By 2030 the percentage of the population living in cities is expected to rise from 48% to 57% across South East Asia’s most populous countries – Indonesia, the Philippines, Thailand, Vietnam – increasing the number of people living in urban areas by a further 87 million.

Urbanization is expanding beyond the major cities and metropolises of Manila, Ho Chi Minh City, Jakarta and Bangkok in to second and third tier cities, districts and provinces.

Digital Transformation and the demand convenience is contributing to the rise of South East Asia as a digital powerhouse.

A noticeable trend in higher density areas is shopping at supermarkets less frequently is emerging. Similar to developed countries such as the United Kingdom (Tesco Express, Sainsbury, M&S metro stores), SEA consumers are shopping more frequently, or after work, to purchase food for the evening or the next day.

A key driver is proximity to your home and work. PWC suggest this can be attributed to the underdevelopment of infrastructure, and the unwillingness to travel longer distances to a supermarket or hypermarket for a larger shop.

This demand for convenience has spread to on-demand food delivery, transport, education and health. Grab and Go Jek, which started as on-demand ride hailing services have expanded to offer food delivery and payment services.

Combined with the rapid rise in smartphone ownership and the rollout of 5G, and LTE networks, by emerging markets such as Thailand, Indonesia and the Philippines we’re seeing convenience driven by hyperconnectivity.

From the graphs below we can see how people are adapting to technology. Google Trends shows how search queries in the Philippines for “near me” and “near me now” have continued to increase, revealing a clear expectation and demand for convenience by finding what people want, and when they want it.

Search Term: “near me”

Search Term: “near me now”

The fabric of South East Asia is changing, and digital is playing a pivotal role in the change. Businesses have the option to stand still and die, or they can rise to the challenge, and thrive. The opportunities are vast in a demographically favorable region – new industries will be assembled, jobs will be created (and lost), while the standard of living for hundreds of millions of people will improve.

Here’s to the rise and rise of South East Asia as a digital powerhouse.